Blog > How To Care & Maintenance Green How To

TAGS Care & Maintenance Green How To 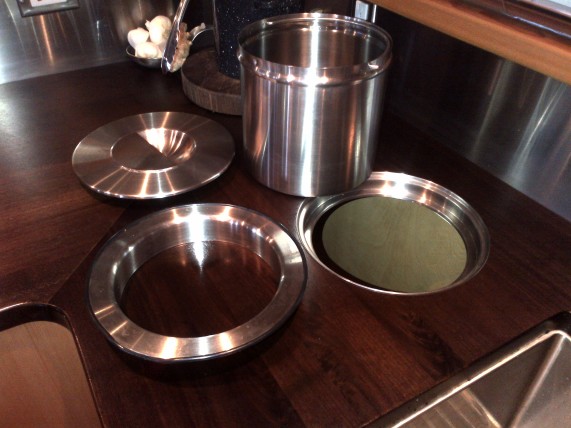 My friend wrote to brag about her new stylish food-scrap collecting bin in her kitchen, and  got me thinking about the messy topic of compost and food waste.

Compost is a fascinating topic, but not one we tend to bring up in polite conversation much. But we should. More people should compost. Luckily, lots of cities are beginning “food scrap” collecting, and lots of homeowners are building composting bins.

If you’re in the latter crowd, then you already know that food scraps at home are a significant part of any successful composting program. The cost of not composting food scraps means that they then rot in landfills and off-gas tremendous amounts of methane, which is far more harmful than C02 when we’re talking climate change.

Here are some numbers on how much food we chuck out every year, and the costs associated with it.

That’s heavy stuff. And all we need to do to end that vicious cycle is to get onboard with the awesomeness of composting. Put that food back in the Earth, people!

One problem with food scrap saving is many of the containers used for saving them tend to be flawed. They’re not odor-proof, they’re unattractive, they’re awkward to open, close, or fill. Bleh!

My friend Steph wrote me the other day to rave about what she just bought and installed — a stainless steel composting bin sunk into her kitchen counter, and so flush that all she needs to do is lift its air-tight lid and push all her scraps from meal prep straight into the bucket.

It’s a terrific concept for so many reasons and she wants me to tell all y’all about the joy of stylish scrap-saving. Steph wrote me the following letter:

“So, we have a brand new kitchen and one of the items on “must have” list was a compost solution – one that was hygienic, smart looking and smell/fruit-fly proof.

I am DELIGHTED with what we chose and has been well worth the $250.00-ish cost. The model is the Blanco Solon.

So much nicer than any plastic bin – especially ones issued by regional districts for their compost pick-up programs, as they look like some sort of utilitarian (read: “ugly”) mop-bucket sitting on the counter. Plus, with a counter-sunk unit, it’s easy to sweep peelings, etc., off the chopping board and straight into the Solon!

I’m fortunate that we have a yard and, therefore, our own outside compost bin. I just walk the bucket with the handy-dandy handle to the bin outside, empty it, rinse it and voila – good to go again.

Interestingly, I bought this in Victoria and they have only ever sold one to me – I don’t think consumers are aware of them.” 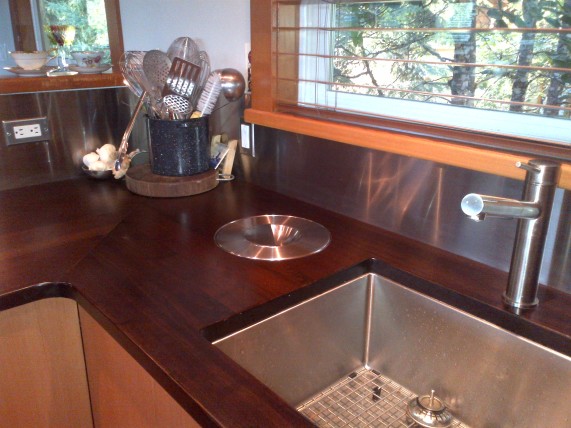 The Perks of Composting

Folks like Steph will tell you that composting is what takes your garden to the next level, especially when you’re composting scraps of food you grew!

Garden-wise, it packs your soil with tons of nutrients needed for healthy, thriving food gardens.

Planet-wise? Well, as I alluded to off the top, it’s the methane release from rotting food that is one of our era’s greatest foes. The United Nations writes:

“The impact of food waste is not just financial. Environmentally, food waste leads to wasteful use of chemicals such as fertilizers and pesticides; more fuel used for transportation; and more rotting food, creating more methane – one of the most harmful greenhouse gases that contributes to climate change. Methane is 23 times more potent than CO2 as a greenhouse gas. The vast amount of food going to landfills makes a significant contribution to global warming.”

Why I thought Steph’s composting bin was such an interesting idea is because composting is something that just isn’t sexy. It’s a pretty grody concept when it’s in such an ugly bucket and done so basically. She’s right, it’s just ugly.

If composting was something that was attractive and well-made, odor-proof and not so utilitarian-looking, maybe it’d have more people onboard. It’s not just the hippy in the 20-year-old tie-dye shirts who’s out there composting — it’s pretty mainstream now. Want to learn more?  A site called Home Composting Made Easy offers a handy chart of dos/don’ts in composting. Not everything can be composted. Dairy, meats, fishes, bones, these are bad, mmkay? No one wants maggots or stankiness. Abide the list and  your food scrap composting shouldn’t smell.

What if every new home was required to put a compost bucket in the counter like this? What if every city made it easy for food scraps to be collected? What if the city took charge of composting scraps and then allowed, on a first-come basis, for people to pick up compost they need for a minimum price?

It’s pretty obvious that what we’ve been doing isn’t working. We need drastic rethinking of food waste and the methane it releases. Programs that expand composting as a city enterprise would not only create jobs but save the city the cost of buying manure or compost for city gardens, it’d help farmers and urban food growers achieve better success with more environmentally-safe products.

The solutions are right in front of us — but hey, you don’t need to wait for laws! You can do this all by yourself. Grab an attractive counter-sunk scraps bucket and be the change we need today. Huzzah!

TAGS Care & Maintenance Green How To