Deck Installer Advice: 9 Things You Need To Know When Installing A Deck 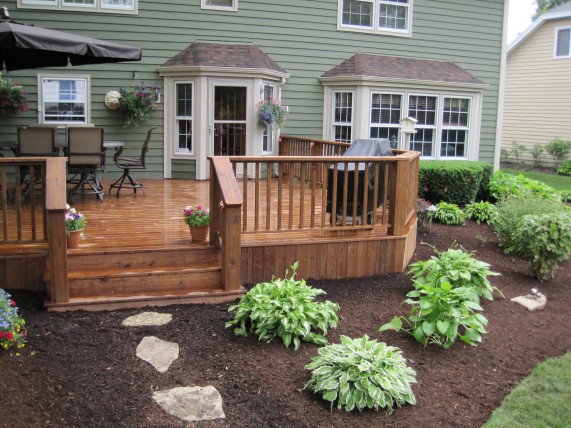 When installing a deck yourself, here are 9 pieces of advice from an experienced deck installer to heed.

Take a moment to imagine the future with me. Picture yourself on a warm summer night, and, as the sunlight fades, there is a clear view from here to Venus. It’s too early in the season for mosquitoes, but never too early for ribs on the barbeque. The kids are asleep and you know that, finally, it’s time for a glass of wine on the deck.

The problem is your dream deck. It doesn’t exist.

Building or renovating a deck is a big job. It’s too difficult for a DIY job, and it’s too expensive. It’s not something that can be done without a great deal of neighborly help, or, at least, a giant toolbox. Or is it?

In this article, we’ll learn first-hand what it’s like to renovate a deck, and turn it into the ideal spot for the kids to play, for you to grill up the world’s best steak, or for your family and friends to relax and watch the sun set.

I got the scoop on the most important things you need to know about building a deck from Dustin Keir, DIY guru and all-around Awesome Guy. Last spring, Dustin spent approximately 65 hours rebuilding his 1970s-era, 900-square-foot deck, which was suffering from substantial rot that set in long before he bought this fixer-upper. Here’s what he learned in the process.

1. Know what you’re dealing with

Decks, like basements, get stability from the foundation of a house, but you can’t always see what’s going on. Dustin explains that although he was able to lift off the existing plywood decking to remove and replace the damaged 2-by-6 beams underneath, it was difficult to determine the extent of the rot without some careful assessment.

In his case, he found that the issue was caused by rainwater pooling at a low point on the deck’s surface, so the structural damage was minimal. If you’re in doubt, however, this is the time to get a professional opinion. Don’t replace your whole deck only to have to do it again in a couple years’ time.

2. If you’re rebuilding, you don’t always have to replace the entire deck

Dustin found that he was able to contain reconstruction to a small area, which cut down on time and costs. Removing the plywood top with a circular saw, he switched out the damaged 2-by-6 beams, and reinforced the area with two additional 4-by-4 posts so that pooling would be minimized.

3. Design your deck with safety and affordability in mind

When he was planning out his deck space, Dustin decided to splurge in some areas and cut back in others, but his priority was safety. With two young children, and living in an area affected by heavy rainfall, he wanted to maintain the kind of rough deck surface that would prevent slipping, so he chose to use a low-maintenance rubberized deck surface coating product as a base.

Because this was a less-expensive option, Dustin invested more in railings that would not only provide safety, but also make the deck look fantastic. 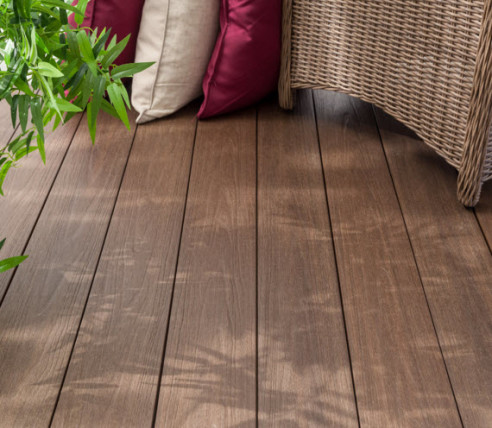 No matter what decking you choose, removing an old deck surface can take a lot of time. Dustin had to use a floor sander and a power washer to get the existing paint off of his deck. Depending on what is already in place, you may need to rent equipment. A sander works for gritty surfaces, while a power washer may do the trick for already-peeling paint.

5. Make sure you have all the tools you need ahead of time

For his deck project, Dustin relied on a number of saws: the circular saw for removing the old materials; a table saw to cut the new plywood; and a miter saw to shape the 4-by-4 posts. He used a large drill for installing the lag bolts for the posts and the plywood screws, and he suggests that you invest in the best levels you can afford so that you can avoid any issues with drainage over the long term. Safety glasses are also a must.

6. Plan on more time than you expect for decking

Although Dustin recommends composite decking for most deck projects, using a deck surface coating product was the right option for his family home. That having been said, it wasn’t easy to install. In fact, he says that working with the surface coating took up most of the man-hours of the deck project altogether. After he laid down the new plywood, which was a simple process, he had to spread the product on the surface on his hands and knees.

As Dustin explains, “Grit paint like this dries so fast that I was almost trowelling it on, rather than rolling it on as the manufacturer recommended. I was sweating by 10 in the morning, but there was nothing to do but keep on. Putting so much time into this part of the project meant that the railing installation was delayed as well.” He also explains that the rubberized paint doesn’t come off anything easily – including you. Prepare to throw away your clothes and shoes if you choose this route.

7. Do the math… carefully

Dustin tells me that he cannot stress this enough, especially when it comes to installing a deck railing. “You need to do the math,” he says, “because you want your posts to be aligned across your entire deck. You don’t want to end up with shorter railing segments all over the place because you haven’t measured correctly.” This means that you want to make sure that you have an equidistant gap between each post so that the railing will look professionally installed.

If you have a wraparound deck, like Dustin’s, you will need to consider what will look best. Take a few minutes to draw out the deck on a piece of paper, and map out the right amount of posts for your space.

You may get frustrated when trying to install your first railing segment, Dustin says, but the process speeds up very quickly once you are underway. He chose these vinyl railings for their ease of installation and maintenance, and their classic look. 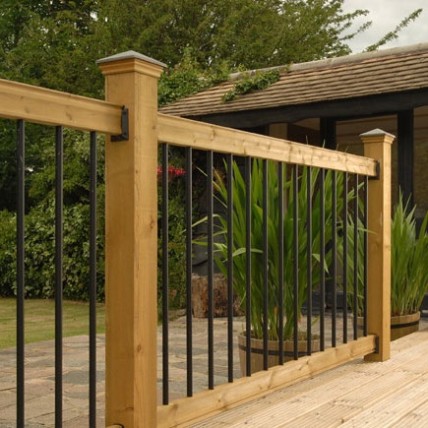 He found the instructions easy to follow, which made the process faster than expected. Dustin used pressure-treated cedar posts as a foundation for the 120 feet of railing, which meant that it would stand up under all weather conditions for many decades. Although putting in the first one was a bit finicky, once he learned the drill the rest of the work went quickly and easily.

One thing that Dustin regretted not doing is running a small electrical line through the top of the railing. This would have allowed him to put in a deck lighting system that would be decorative on warm summer nights, and install Christmas lights easily in winter. This is a fairly easy addition to the project, he says, especially if you already have had some experience with light electrical work.

Drink a lot of water. “Seriously. This project requires a lot of hydration.” Set aside about 6-8 days of work for this kind of project (Dustin spread it out over several weekends), and try to get the deck finished long before the hot days of summer set in.

“It was a Herculean effort to figure out the process, but the end result looks great,” Dustin says. “I’m really proud of the project. That’s especially true because I found it hard to find a lot of in-depth help and deck product reviews online.” Dustin hopes that his experience and recommendations will be helpful for others looking to try their hand at deck building. “But don’t be afraid to make mistakes,” he offers.

Every home improvement project has its challenges, and the little quirks that result are those that end up being the best stories to share with your friends and family. Building a deck means starting early in the year, planning ahead, and measuring twice (no, three times). But it’s a project you can definitely do by yourself. Go ahead and start designing your deck now so that you and your family can relax all summer long.

And throw a couple of steaks on the barbeque for Dustin while you’re at it.

What are you planning for your deck this year? Are you building a deck from the ground up, or renovating a current one? What deck accessories are you thinking of adding? What are some of your concerns when it comes to a DIY deck installation?

Tell us all about it in the comments of this post.